None of the ... images show a general view of the catacombs. They all focus on the bodies and the different ways in which they are presented (the coffins can be open, or have an opening protected by a grid, or lateral windwos, and bodies are stacked on several levels, either standing or lying) and on the written inscriptions they bear, in particular the label around the wrist of each of the mummies with the name and the dates of birth and death.

Cri du Coeur is a horizontal paper frieze almost 50 metres long. The same image is printed an incalculable number of times on sheets of coloured, painted and stained paper: the profile of an Egyptian mourning woman in lamentaion. The repetition of this single motif produces a crowd, a choir. But it is not homogeneous. The silhouettes are more or less densely shaped and the rhythm guiding the procession is irregular. They span from clear to dark... from right to left... Spero got into the habit of wroking at night, blurring the limits between daytime and night-time but also between life and death.

Part of a series of 14 photographs and small drawings for Wojnarowicz's exhibition 'Weight of the Earth'. Wojnarowicz took this picture during a visit to the Natonal Museum of Natural History in Washington D.C., where he photographed details of a diorama illustrating an Indigenous American method for hunting buffalos by running them off a cliff. The artist described it as 'a metaphorical image for the title of the show, a sense of impeding collision contained in this acceleration of speed with the structures of civilisation'. Untitled (Buffalos) has become iconic, one of the most haunting artistic responses to the AIDS epidemic.

Aquatic larvae collected in the best rivers of lower mountain ranges (Cévennes and Pyrenees) are borught to the studio alive, placed in an aquarium filled with oxygenated water at a temperature of 4 degrees Celsius, taken out of their original cocoon made of sand and fine gravel, and placed ona bed of gold dust and precious stones. Immediately, the larvae start building a new case. 'In nature, the case is a camouflage device, but here, it shines light and breaks mimicry.' In 1979, only native gold dust was used. Cabochons of turquoise, opal, lapis lazuli, and coral as well as rubies, sapphires, diamonds, semispherical and baroque pearls, and tiny gold twigs were progressively added. it is also possible, by mutilating some parts of the case, to trick the animal into repairing it by placing material precisely on the damaged spot.

'Powerless Structures' by Elmgreen and Dragset

The generic title Powerless Structures refers to a series of 'figures' by Michael Elmgreen and Ingar Dragset that reorganise a given space according to its multiple functions. With a title inspired by a 'misreading' of French philosopher and historian Michel Foucault, these figures tackle the issues of the relations between subject and governing power, and of the subjugation mechanisms that are not external to individuals but rather constitute them as subjects who can either accept such mechanisms or resist and alter them. The two artists bring to light this imaginative transformation of structures by plauing with, and against, artistic institutions. 'New museums and McDonald's are the most standardised forms today. The problem is that they are not flexible.' Elmgreen and Dragset thus strive to increase the 'flexibility' of a shop, a social welfare centre, a park, a hospital, an art gallery, a prison, and each of the figures of the Powerless Structures series.

Gabriel Gaveau is the first paino painted by Bertrand Lavier for the exhibition '5 pièces faciles' at the Eric Fabre gallery in Paris, in 1981. As he didn't have a studio, the artist used Eric Fabre's former gallery space and Fabre also paid for the piano, bought at the flea market. The 'Gabriel Gaveau' instrument is a pianola, a traditonal piano equipped with a mechanism that enables it to play on its own. it can still be used. Indeed, like all the objects painted by Lavier, it remains functional: this is what differentiates it from a replica. It is covred in paint - not transparent gel or tar but a coat of the same colour as the object itself. This same-colour coat thus covers the piano, the white and black keys, the silver pedals and the golden plaque bearing the name 'Gabriel Gaveau'. At the time, Lavier called this ostensible and manifest gesture, as a modern painting cliché, 'the Van Gogh touch,' meaning that the paint itself has an attractive power.

The work consists of a domestic freezer surmounted by a sofa in the shape of a giant mouth, referencing a drawing by Dalí.

La Bocca is a variant of a three-piece 'edition'. each employs a different brand of freezer.

"Towards an abstract icon" by Paul Thek

In 1980, Paul Thek was in New York working as a janitor in a hospital. Ina letter to Franz Deckwitz, he says he is working on 'little canveses, very little, 9 in. by 12 in., all different styles, all different subjects, though I think a lot of Kandisky, of Klee, of Gustave Moreau... and of Niki de St Phalle.'

Made from a sheet of plastic pierced with holes, this untitled piece was shown in 2011 at the uptown space L&M Arts in New York City. He showed a seires of paintings composed of shredded garbage bags, plastic sheets, old blankets, and used towels that covered, partially or fully, abstract traces painted on the canvas These elements are used commonly in industry or construction and can be read as both a protective gesture - plastic sheets are used to protect, blankets are used to keep warm - and a violent one - it prevents one from seeing, forcing the viewer to look at the painting's elements only at the edges or through the holes and gaps. At L&M Arts, this readymade draping wall created a conflagration between the public visitng the gallery and the homelessness of a nearby refuge. 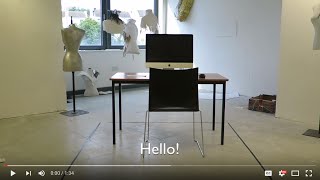 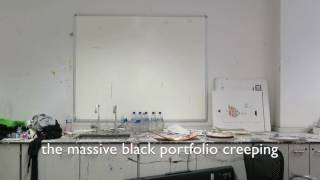